What Causes Yellowing Of Nails? 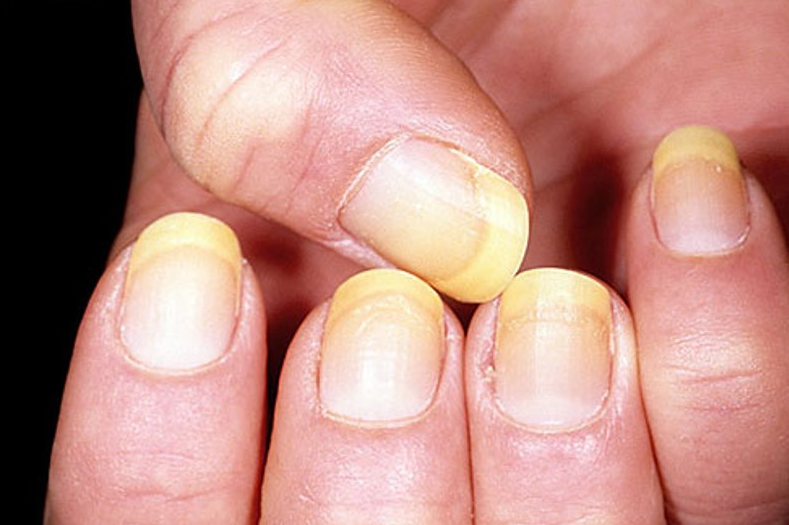 Yellow nails can be caused by a variety of factors, including cosmetic issues (such as wearing dark nail paint) and basic nail health issues (such as fungal infections).

These are the most common causes of yellowing nails.

1. Nail polish in a dark color

According to dermatologists, the tint of these nail paints can really cause the nail to change color.
“The pigment reacts with the keratin in the nail, turning it yellow,” dermatologist Rachel Mayman said to Mind Body Green.

“Brittle nails can also be a result of this.” You may notice a change in color, such as yellowing, as your nails become thinner and thinner. This is a tangible evidence that the nails need to be varnished less frequently. Always use a neutral foundation before applying dark colors to your nails.

2. Separation of the nail plates

Also known as onycholysis, the separation of the nail plates and the nail bed can also cause the nails to look yellow.

This happens as a result of trauma, chemicals, certain medications, and certain inflammatory conditions such as psoriasis.

Find out more about: Dried Figs In Olive Oil – This Will Revitalize Your Body

This condition, which is an excess of beta-carotene, is most commonly seen in children. In addition to yellow nails, it can also cause yellowing of the skin, says Dr. Mayman.

When a fungal infection, such as an athlete’s foot, originates in the nail, it causes the nail plate to thicken and debris to accumulate beneath it, resulting in a yellow hue. Toenails are affected more frequently than hands.

Nails are made mainly of hardened protein, a protein called keratin. When we have little protein, calcium or other vitamins, the effects are sometimes visible on the nails. That’s why nail-strengthening antioxidants, such as vitamin E, are important in nail care. Studies even show that vitamin E can help maintain a healthy, fresh nail color.

After reading this text you can also read about: Make The Most Powerful Sinus Medicine Yourself