Kidney Stones: What Foods Should Be Avoided? 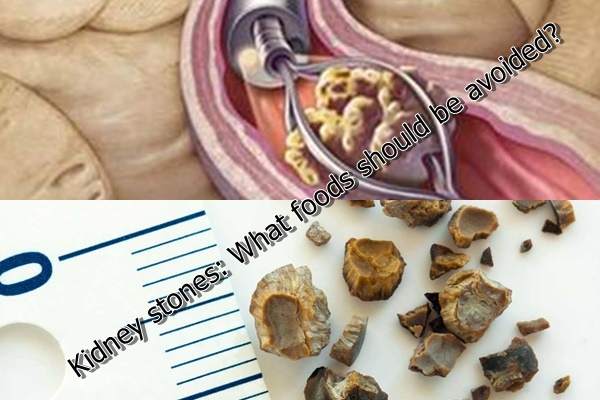 The presence and production of concrete (sand, stones, or stones) in the kidneys is known as nephrolithiasis. Certain chemicals (calcium, oxalates, phosphates) that are present in urine in higher concentrations than allowed generate kidney stones. Poor diet, obesity, genetic predisposition, low fluid intake, and other variables have been linked to the development of nephrolithiasis.

Kidney stone production is influenced by poor nutrition, hence specific meals can increase or decrease the risk of getting kidney stones.

In order to successfully prevent nephrolithiasis, it is necessary to determine based on the chemical composition what type of kidney stone it is.

There are 4 major groups of kidney stones:

1.Calcium stones. This is the most frequent type of kidney stone, and it is divided into two subgroups: calcium oxalate stones, which are more prevalent, and calcium phosphate stones, which are less common. Calcium oxalate stones can be caused by a number of factors, including low urine pH, high calcium and/or oxalate concentrations, and so on. Calcium phosphate stones are most commonly caused by an increase in the content of calcium in the urine as well as an increase in the pH of the urine (alkaline urine).

2.Struvite stones are a type of struvite. A urinary tract infection is the most common cause of these stones.

4.Cyst stones. This type is the least common and occurs in cystinuria. It is an autosomal recessive disease characterized by insolubility of cystine (neutral amino acid) in the urine and as a result calculi are formed.

NUTRITION ACCORDING TO THE TYPE OF KIDNEY STONES

Depending on the group of kidney stones, an appropriate diet is advised.

1.Sodium reduction. In order to have control over the amount of sodium that you consume daily, it is necessary to be informed about its nutritional values ​​before consuming a certain product. Avoid consuming products that contain high levels of sodium such as hot dogs, fast food, canned food, processed frozen foods, meat products such as salami, tea, bacon and others.

2.Also watch out for substances that may contain “hidden sodium” such as sodium bicarbonate, sodium alginate, sodium nitrate or nitrite, monosodium glutamate and others.

3.Foods high in oxalates should be avoided. Some of the oxalates expelled in the urine are made by the body, but certain products with high oxalate concentrations are consumed, which raises the level of oxalates in the urine. Spinach, black tea, Coca-Cola, chocolate, nuts, coffee, and other foods are among them.

4.Obtaining the appropriate amount of calcium. Calcium that enters the body in regular proportions from the food is not thought to enhance the risk of calcium oxalate stones. Attention! If you use calcium supplements, you should be aware that you may increase your chance of acquiring calcium oxalate stones, especially if you don’t take them with a meal.

Because this form of stone is caused by a kidney infection, treatment entails removing any existing stones in the urinary tract as well as treating the infection. So yet, no medical evidence has been found that a specific diet can prevent the formation of struvite stones.

Purine intake is being reduced. Purines are found in foods such as eggs, meat, fish, and especially animal offal (kidneys, liver, and brain), which are broken down in the body and expelled in the urine as uric acid. The production of the eponymous type of kidney stone is caused by an increase in uric acid content. These patients are advised to avoid meat products and protein intake from foods such as dairy products, soy, lentils, tofu. If meat is consumed, it should not be in excess of 170 grams per day.

Treatment of this condition requires specific therapy that includes consuming large amounts of fluids and alkalizing the urine.

1.If you’ve had kidney stones in the past, you should drink at least 2 liters of water per day.

2.Citrus drinks, such as lemonade and fresh orange juice, contain citrate, which prevents the production of calcium oxalate kidney stones, but can have the opposite effect if calcium phosphate stones are present.

3.Consumption of tea and coffee is allowed in moderation, except for calcium oxalate stones.

Find out more about: Homemade Syrup For Cough With Honey, Olive Oil And Lemon